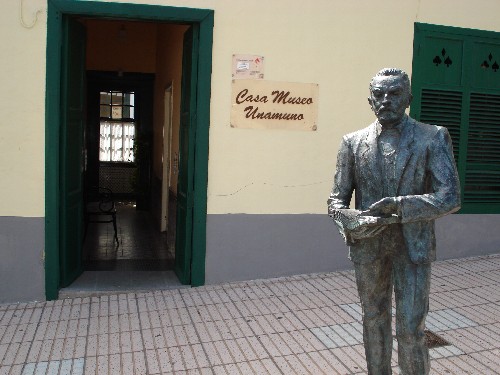 The Unamuno Museum is located in a 19th century house in the town of Puerto Cabras (today Puerto del Rosario).

This house (Hotel Fuerteventura) was inhabited by Miguel de Unamuno during his exile in Fuerteventura, from the 12th of March 1924 until the 9th of July of the same year.

Unamuno was exiled from the mainland to Fuerteventura by General Primo de Rivera, and his crime was "denouncing the political situation in Spain at that time.

On his arrival he became friends with several inhabitants of Fuerteventura, including Ramón Castañeyra, and his house was a regular meeting place for Unamuno and his friends.

In this House Museum, we can see what the rooms Unamuno used were like, such as his bed, his desk, the kitchen or the living room he used.

And even more interesting is to read the many texts by Unamuno about Fuerteventura, which decorate the walls of this museum.

The Museum is located in the most central area of Puerto del Rosario, next to the Cabildo de Fuerteventura building, and opposite the Church of Nuestra Señora del Rosario.