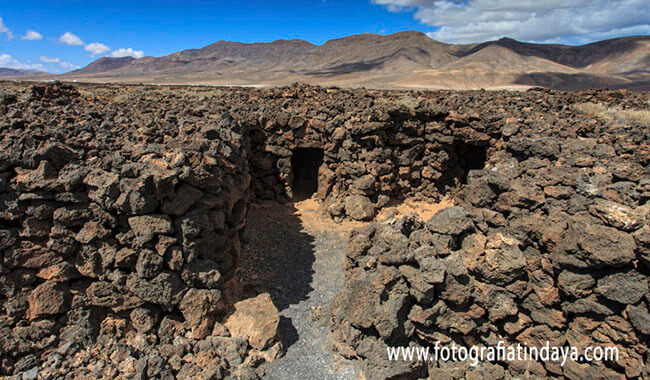 The settlement of La Atalayita is an archaeological site whose occupation dates back to the aboriginal period of Fuerteventura, the Mahos (a people of Berber origin from North Africa who lived on the island before the conquest in the 15th century) and has been continuously reused by shepherds after the conquest and colonisation of the island.

The first studies carried out in the settlement began in the 1950s and 1960s with the Excavations Commissioner Sebastián Jiménez Sánchez, who called it El Saladillo.  It was not until 1974 that it became known as La Atalayita, and in January of the same year the three campaigns of archaeological excavations began, carried out between 1974 and 1977 under the direction of Professor Demetrio Castro Alfín.

During those years, a large amount of archaeological material was collected on the surface, consisting mainly of fragments of handmade ceramics with decorations, belonging, according to the researchers, to the island's aboriginal period; fragments of plain, popular and lathe-made ceramics, as well as malacological, lithic and skeletal material.  The same type of material was extracted in the cuts made, except for some objects such as a fragment of metal and a pin of the same material and also some pieces made of shell, polished and with holes, in the shape of a pendant.

The uniqueness of the settlement's constructions and its location between two protected areas of great natural and cultural value, Malpaís Grande and Cuchillos de Vigán, make it one of the most important sites of the island's archaeological heritage.  Its dissemination will allow different aspects related to the aboriginal world to be made known, as well as guaranteeing the enjoyment of its cultural values for future generations.