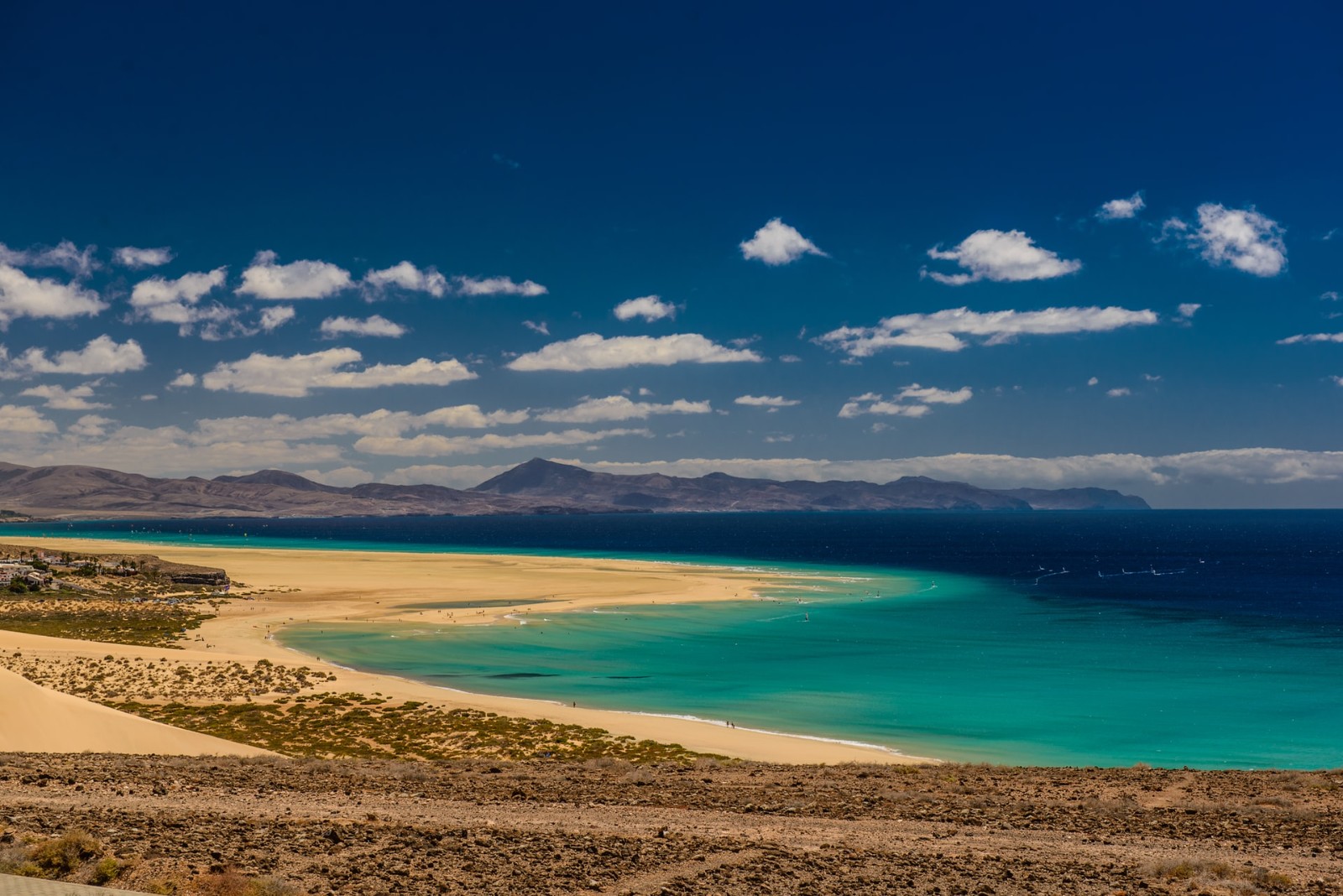 How to Spend 3 Days in Fuerteventura

Are you thinking of taking a few days off and don't know where to go? Don't worry, because in this article we're going to tell you what to see in Fuerteventura in 3 days, a magical island that takes visitors to sceneries more typical of other latitudes.

The island of the Canary archipelago closest to the African continent (only 97 kilometres away) was described back in 1924 by the great Miguel de Unamuno, a reference of the Spanish Generation of '98 (a group of novelists, poets, essayists, and philosophers  committed to cultural and aesthetic renewal, and associated with modernism), as follows:

“It’s a desolation. There are hardly any trees and water is scarce. It looks like La Mancha. But it's not as bad as we were told. The landscape is sad and desolate, but it’s beautiful”.

Keep that last term on your mind because Fuerteventura has endless attractions. In fact, there are so many that you won't have time to see them all in just three days... That's why we've selected the must-see places for your trip to Fuerteventura. 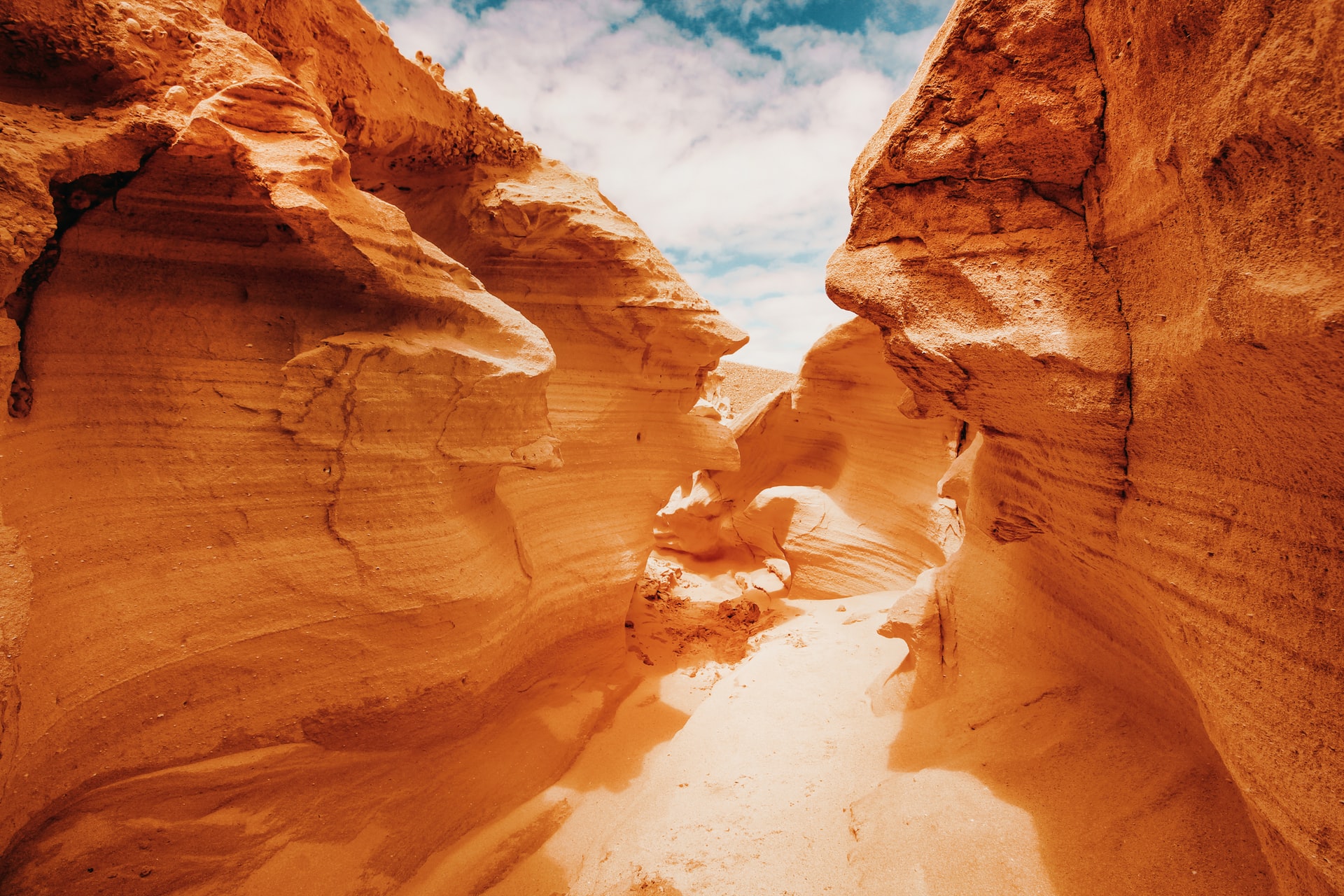 First of all, it should be borne in mind that this is the second largest island of the Canary Islands and that, as a result, the distances are considerable. For example, the distance from Corralejo in the north to Punta de Jandía in the south is about 130 kilometres.

Therefore, we have decided that it’s best to visit one part of the island each day, starting from the capital of Fuerteventura, Puerto del Rosario, whose central location makes it the ideal starting point.

We’ll start in the north, continue in the centre and finish in the south or vice versa. All set? Then we start our adventure on Maxorata, as the ancient natives called the island. 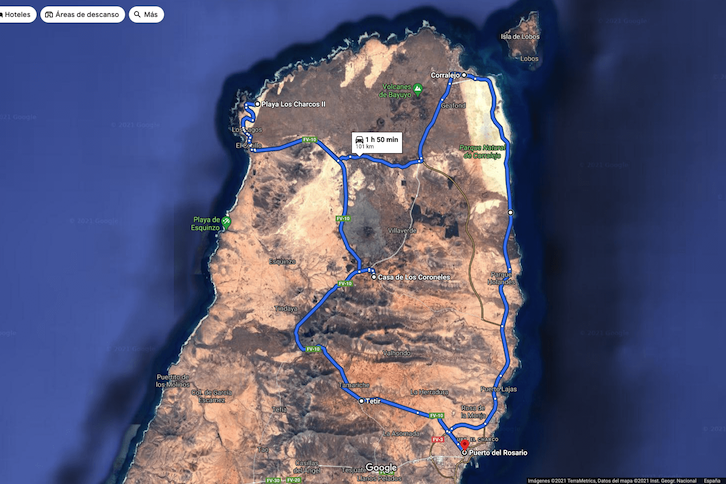 Puerto del Rosario (known as Puerto de Cabras until 1956), the main city of the island with about 42,000 inhabitants, is our starting point. Although Fuerteventura is a true paradise of relax and beaches, you can also get your city side going here.

The next stop is the picturesque resort of Corralejo, located opposite the island of Lobos with the neighbouring island of Lanzarote in the background. This is the nerve centre of the north of Fuerteventura, with a multitude of services of all kinds.

We continue our journey towards the west of Fuerteventura along the FV-1 until we reach a roundabout where we turn right towards El Cotillo along the FV-109 and the FV-10. We’ll pass through the small village of Lajares, famous for its goat meat.

In El Cotillo you can enjoy the best of a picturesque seaside town that captivates everyone who visits it. Don't hesitate to visit La Concha beach or the little beaches of Los Charcos under the watchful eye of the Tostón lighthouse, a windsurfers' paradise.

We retrace our route along the FV-10 and continue south towards La Oliva, where we can visit the Casa de los Coroneles, the former headquarters from which the island was governed by the military and the longest house in the archipelago.

We continue our route south along the FV-10 and stop at the village of Tetir, located in the middle of a fertile valley and surrounded by hills, where the Vega de Tetir Handicraft Market is held every three months.

We continue along the same FV-10 road to the starting point, Puerto del Rosario. It’s a route of about 100 kilometres which, if we don't stop, could be completed in less than two hours. But we’ll certainly want to enjoy the route at our own pace... 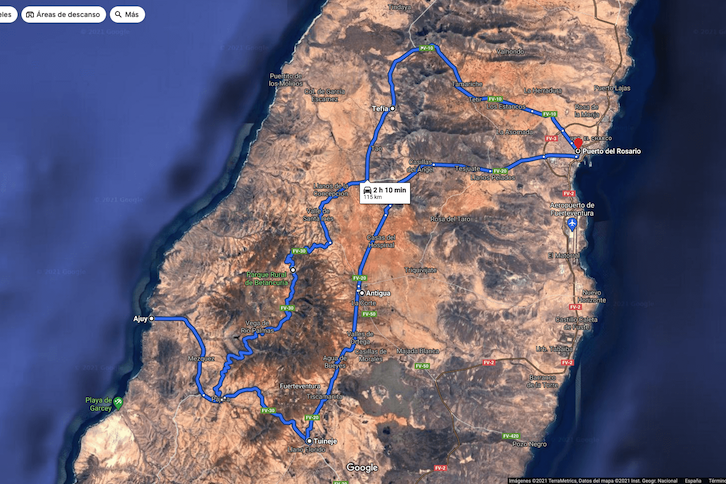 Our route of things to see in Fuerteventura in 3 days continues through the centre of the island. We leave Puerto del Rosario heading west on the FV-10 and, shortly after leaving the village of La Matilla, we turn left on the FV-207 heading south to Tefía.

Here we can visit the Fuerteventura Astronomical Observatory to discover the mysteries of the universe. We continue south on the FV-207 and pass through the village of Tao until we turn right onto the FV-30.

We continue towards Pájara along this winding road that passes through several villages, including Betancuria (a colonial town that was the first capital of the island and home to the Museum of Sacred Art and the Archaeological and Ethnographic Museum of Fuerteventura).

In Pájara you can visit the Hermitage of Nuestra Señora de Regla, an Asset of Cultural Interest. We continue west on the FV-605 and connect with the FV-621 to the village of Ajuy, which is home to the impressive Ajuy Caves.

We retrace our steps back to Pájara and continue towards Tuineje on the FV-30, the site of countless battles throughout history. We continue north on the FV-20 to Antigua, where we visit the Museo del Queso Majorero (Museum of Majorero Cheese), and continue back to the starting point. 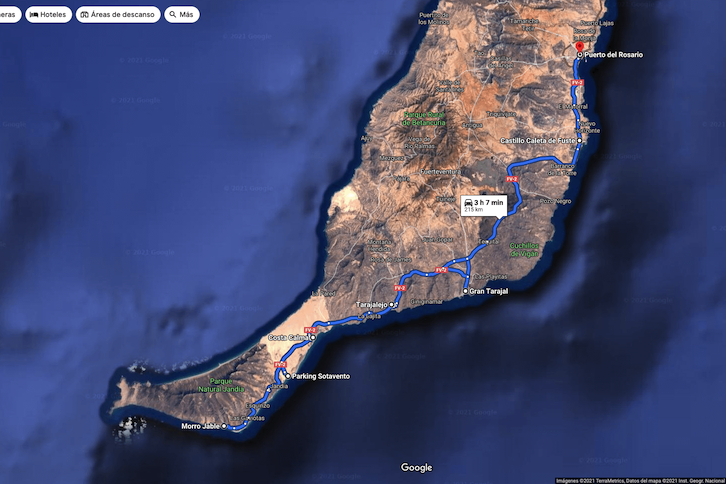 The itinerary of things to see in Fuerteventura in 3 days continues with a long route departing from Puerto del Rosario south on the FV-2 motorway, making the first stop in the quiet tourist town of Caleta de Fuste, where the Castillo de Fuste or Torre de San Buenaventura is located.

We continue south on the FV-2 and turn left on the FV-4 to the next stop: the small fishing village of Gran Tarajal. Here we can taste the best fresh fish in the area in front of an impressive black sand beach.

We return on the FV-4 and turn left onto the FV-520 to rejoin the FV-2 and follow the signs to the famous beaches of Sotavento, perhaps one of the most famous postcards of the island and a paradise for windsurfers.

We continue south on the FV-4 again and reach the tourist town of Morro Jable, home to a long beach that starts much further north at Costa Calma and ends at the harbour.

The return to our starting point is easy, as we only have to follow the FV-2 motorway to Puerto del Rosario. 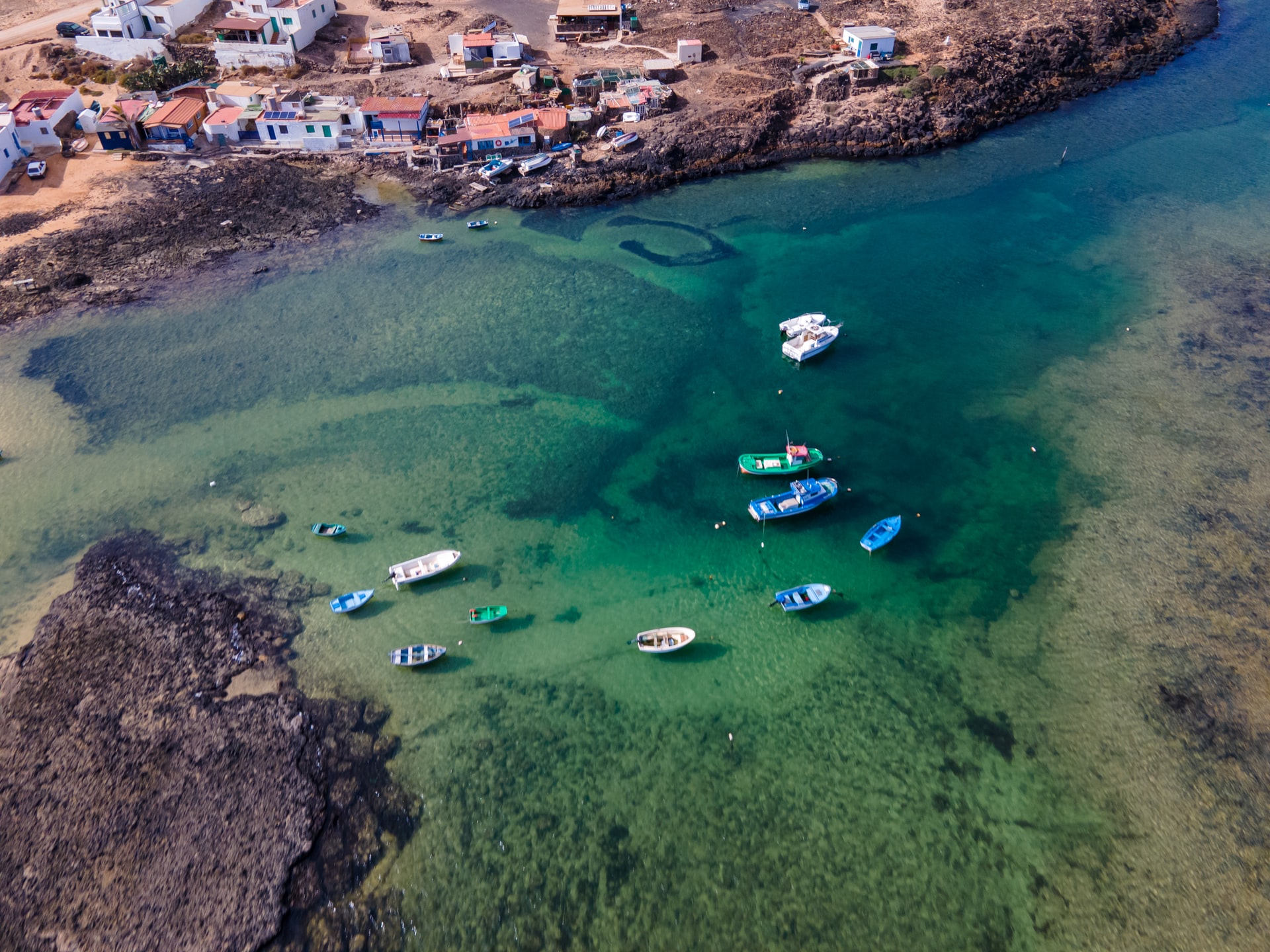 BONUS: if we have an off-road car, we can follow our route of things to see in Fuerteventura in 3 days from Morro Jable along a dirt and rocky road that offers two options. To the left we’ll reach the Punta de Jandía lighthouse and to the right we’ll end up at the majestic beach of Cofete.